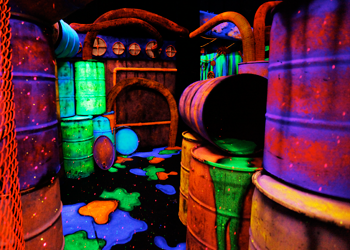 Many are attracted to high-tech electronic equipment, which is used in laser tag. Players put on headbands, vests or capes equipped with special sensors. Sensors serve as targets for shots and record hits. Special equipment is not required. It is enough to have comfortable sportswear and shoes suitable for the season. Some, in order to bring the situation closer to the military, prefer camouflage uniforms. The organizers provide this opportunity.

The laser tag area is chosen at the request of the participants. This may be a forest glade, a desert area in a city with abandoned buildings, or a specialized training ground. Fans of more comfortable conditions will use the so-called Arena laser tag. It is held in a spacious indoor room with ventilation and good lighting. The arena may look like a maze or space landscape.

During the battle, special effects that simulate a real battle are used. Bursts of shells, clouds of smoke, the sounds of shots when firing, the play of light create a corresponding illusion. The impression is complemented by stylized decorations.

The surroundings depend on the chosen scenario. The organizers take a fragment of a suitable film, a popular book, or a real event as its basis. Players become characters whose goal is to fulfill a certain military mission: to capture the enemy’s base, go through a dangerous maze, free the hostage.

The main thing is the versatility of the game. It can be attended by anyone who is able to run and hold lightweight weapons models: children from 6 years old, girls and people “aged”. The choice of game style hard or entertaining depends on the participants. With reasonable behavior and ordinary caution, all players are guaranteed safety.

Often participants discover hidden abilities. This raises one’s own self-esteem and rating in the eyes of others. The need to act together, coordinate battle tactics can rally people, increase confidence in each other.

At the heart of the game is a battle between opposing teams. Participants are divided into 2 groups with an equal number of people. In the arena, this is not more than 6 people. After issuing the equipment, the organizers instruct the players and introduce them to the rules of the laser tag, depending on the specific scenario. Then the battle begins.